Japanese leader Shinzo Abe visits USC, where he was a student

Heading home from a weeklong visit to the U.S., Japanese Prime Minister Shinzo Abe stopped off Saturday morning for a nostalgic tour of USC, where he was a student in the 1970s.

The brief visit to USC was Abe’s final event in the United States before he headed to Los Angeles International Airport, after a week of diplomacy and economic discussions.

cComments
Apparently Abe didn’t learn anything about Free Speech at USC . Just another in a long line of Asians being elected and becoming Dictators . He’s just playing nice because he’s scared to death of China . He wants weapons and assurances from US that it’s ok for Japan to…
TARDIS64
AT 9:02 AM MAY 03, 2015
ADD A COMMENTSEE ALL COMMENTS
16

USC president C.L. Max Nikias escorted Abe around the campus and presented him with a USC letterman’s jacket inscribed with his name. Abe also met with faculty at the USC Shinso Ito Center for Japanese Religions and Culture.

Earlier in the week, Abe addressed a joint session of Congress and was the guest of honor at a state dinner at the White House. On Thursday, he participated in a public forum at Stanford University about technological innovation. Abe visited Los Angeles’ Little Tokyo on Friday and spoke at a downtown luncheon about economic development.

Abe’s visit to USC was his first time on campus in almost 40 years, officials said. It was considered a private event and was not announced publicly in advance.
Abe had spent three semesters as a visiting student studying English and taking courses in political science, international relations and history. 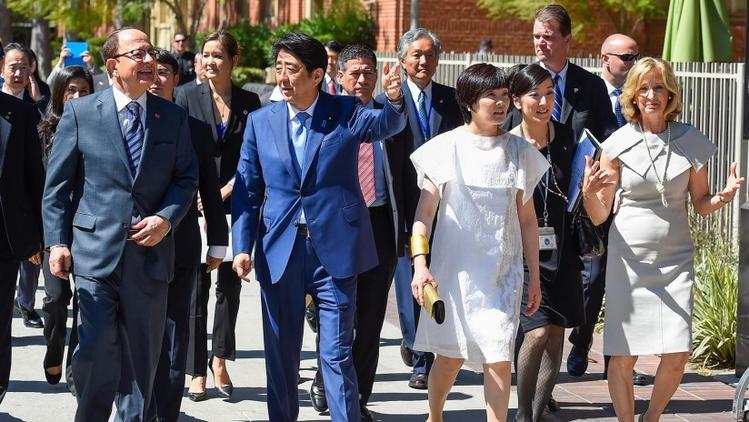